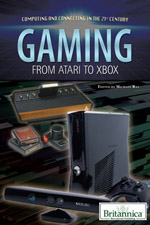 Computing and Connecting in the 21st Century: Gaming, 1st Edition

Boasting vivid graphics, rapid pacing, and complex narratives, electronic games have evolved both visually and substantially since the early days of Spacewar! and Pong. By allowing users to explore fictional universes, engage in stealth missions, play like their favorite athletes or musicians, and imagine realities both similar to and far-removed from their own, electronic games appeal to a variety of individuals and interests. This absorbing volume details the development of electronic gaming including arcade and early home video consoles through massive multiplayer online games, and examines some of the most popular games of all time.