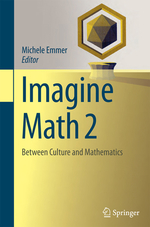 Imagine mathematics, imagine with the help of mathematics, imagine new worlds, new geometries, new forms.  The new volume in the series "Imagine Math" is intended to contribute to grasping how much that is interesting and new is happening in the relationships between mathematics, imagination and culture. The present book begins with the connections between mathematics, numbers, poetry and music, with the latest opera by Italian composer Claudio Ambrosini. Literature and narrative also play an important role here. There is cinema too, with the "erotic" mathematics films by Edward Frenkel, and the new short "Arithmétique " by  Munari and Rovazzani. The section on applications of mathematics features a study of ants, as well as the refined forms and surfaces generated by algorithms used in the performances by Adrien Mondot and Claire Bardainne. Last but not least, in honour of the hundredth anniversary of his birth, a mathematical, literary and theatrical homage to Alan Turing, one of the outstanding figures of the twentieth century.

Front Cover.
Half Title Page.
Title Page.
Copyright Page.
Contents.
Introduction.
1: Mathematics, Numbers and Music.
2: The Fascination of Numbers, between Music and Poetry.
3: The Solitude of Last Words.
4: Mathematics, Poetry and Literature.
5: Gödel's Childhood and Other Algorithms.
6: The Wild Number Problem: Math or Fiction?.
7: A Play at Dusk. Mathematics in Literature.
8: Mathematics according to Italo Calvino.
9: The Mathematical Mind - Iconography of a Tension.
10: Mathematics and Film.
11: Spatial Rhythms in Cinema between the Avant-Garde and Entertainment.
12: Lessons in Mathematics, at the Cinema.
13: Mathematics, Love, and Tattoos.
14: Arithmétique.
15: Mathematics and Art.
16: L'art du Trait est L'attrait de L'Art.
17: Mathematics and Morphology.
18: Morphogenesis and Dynamical Systems: A View Instantiated by a Performative Design Approach.
19: Empirical Evidence that the World Is Not a Computer.
20: Mathematics, Art and Music.
21: Numeri Malefici (Evil Numbers): Homage to Fabio Mauri.
22: From Pollock's Summertime to Jacksontime.
23: From Canvas to Music: Mathematics as a Tool for the Composition of Jacksontime.
24: Mathematics and Applications.
25: Extracting Information from Chaos: A Case in Climatological Analysis.
26: On the Tangible Boundary between Real and Virtual.
27: Fort Marghera and the French and Austrian Plans of Defence.
28: Mathematics and Ants.
29: Myrmedrome: Simulating the Life of an Ant Colony.
30: Ants Searching for a Minimum.
31: Mathematics and Marco.
32: Exotic Spheres and John Milnor.
33: Cellular Automata: The Game of Life.
34: Homage to Alan Turing.
35: Alan M. Turing (1912-1954).
36: Alan Turing and the Poisoned Apple.