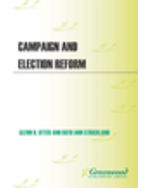 Voting may be the quintessential democratic right, but designing a fair campaign and election system has always been a problem. From the days of the three-fifths compromise to the hanging chads of the new millennium, Americans have confronted a variety of electoral problems and abuses, and met each new problem with an attempt at reform.

Emphasizing the major electoral reforms since 2000, this second edition of Campaign and Election Reform investigates the development of the American electoral system from colonial times to the present. It chronicles efforts to expand suffrage, reform campaign financing, and prevent vote fraud, and traces the development of election technology from the paper ballot to the lever voting machine, from the punch-card ballot to the optical-scan and touch-screen systems.

The book also explores alternative voting systems, such as preference voting and proportional representation, and compares the U.S. electoral process with the voting systems of selected European democracies. Campaign and Election Reform, Second Edition is essential reading for any citizen who wants to understand the U.S. electoral system, what's wrong with it, and how it might be fixed.