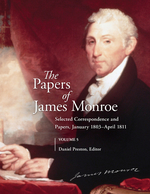 For academic scholars, college and high school students, and general readers interested in the history of the United States, The Papers of James Monroe series has established itself as the go-to resource for primary documents about President James Monroe and the early history of the United States. In this latest volume, readers have access to more than 400 annotated original documents, some of which have never before been published.

This fifth volume of this acclaimed series presents a chronologically organized collection of documents covering the period from January 1803 through April 1811. Following an introductory essay, the subjects covered include Monroe's involvement in treaty negotiations with England, Spain, and France-most notably, those talks surrounding the Louisiana Purchase; his candidacy in the 1808 presidential election; and his appointment as secretary of state in 1811.

The documents in this volume illuminate and illustrate the decisions made by American, British, French, and Spanish leaders during this specific period, especially regarding events leading up to the War of 1812, which illustrate how monumental events such as war can result from the choices of certain key individuals.