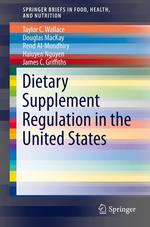 Contrary to the common belief that dietary supplements are “unregulated” in the United States, nutrients and other dietary ingredient-containing products have been regulated in this country for a little over a century at least in some capacity, initially through the Pure Food and Drug Act (PFDA) of 1906 and culminating with the many anticipated regulations to be implemented following the recent enactment of the Food Safety Modernization Act of 2010 (FSMA).   The goal of this brief is to review and discuss the current statutes and regulations surrounding the ingredients, manufacturing standards, safety, and labeling of dietary supplements for the purpose of protecting consumers. ​