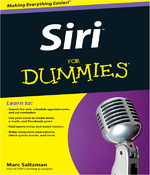 What the book covers: Siri is all about knowing what you can ask, what Siri can do for you, and how to get Siri to do it for you. The book starts out with a look at getting organized with Siri, including setting calendars, reminders, alarms, and taking notes. Then the book tells you how to use Siri on the go for navigation, weather reports, and to find restaurants. Siri is also a dictation device that allows you to create text messaging and e-mail, as well as have Siri make phone calls for you. Siri can look stuff up in a dictionary or on the web, which is convenient when youre driving. You can also get stock quotes via Siri, and let Siri enter numbers into a calculator and give you the answer. Find out how to ask Siri to find music for you to listen to or how to use Siri with social networking applications such as Facebook or Twitter. Make dinner reservations, check sports scores and schedules, check out movie reviews, get turn-by-turn driving directions, and much more! Series features: Information presented in the straightforward but fun language that has defined the Dummies series for more than seventeen years.

Front Cover.
Half Title Page.
Title Page.
Copyright Page.
About the Author.
Dedication.
Author’s Acknowledgments.
Contents at a Glance.
Table of Contents.
1: Introduction.
2: Getting to Know Siri.
3: Using Siri to Organize Your Life.
4: Using Siri while on the Go.
5: Using Siri for Sports, Movies, and Restaurants (Oh, My!).
6: Using Siri for E-Mail, Texting, and Phone Calls.
7: Getting the 4-1-1.
8: Having Fun with Siri: Music, Podcasts, Social Networking, and More.
9: Way More than Ten Ways to Have (Even More) Fun with Siri.
10: Ten Great Ways to Use Siri.
Index.