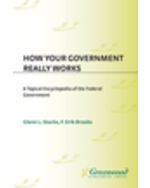 How Your Government Really Works: A Topical Encyclopedia of the Federal Government, 1st Edition

The U.S. government is an ever-more-complex system that few American citizens comprehend in any detail. Even some of its most basic operations, seemingly clear in concept, are in reality intricate and obscure. Although textbooks explain how the government is supposed to work in theory, they don't reveal how it actually works in practice. This book offers a concise and objective explanation of government operations, mapping the federal government's branches, departments, agencies, corporations, and quasi-official bodies--and the bureaucracies that support them. The authors effectively bridge the gap between the government's ideal, balanced structure, laid out in the Constitution, and its actual institutionalized form today, making this a superb resource for students and citizens at large.

Coverage of the government's inner workings includes such subjects as executive-branch appointments, domestic and foreign policy development and execution, the federal budget, the legislative process, the Congressional committee system, the drawing of Congressional districts, the levels of the federal judiciary, aides in all three branches, and the various government offices and oversight agencies.