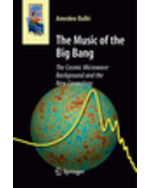 The cosmic microwave background radiation is the afterglow of the big bang: a tenuous signal, more than 13 billion years old, which carries the answers to many of the questions about the nature of our Universe. It was serendipitously discovered in 1964, and thoroughly investigated in the last four decades by a large number of experiments. Two Nobel Prizes in Physics have already been awarded for research on the cosmic background radiation: one in 1978 to Arno Penzias and Robert Wilson, who first discovered it, the other in 2006, to George Smoot and John Mather, for the results of the COBE satellite.

Most cosmological information is encoded in the cosmic background radiation by acoustic oscillations in the dense plasma that filled the primordial Universe: a "music" of the big bang, which cosmologists have long been trying to reconstruct and analyze, in order to distinguish different cosmological models, much like one can distinguish different musical instruments by their timbre and overtones. Only lately, this amazing cosmic sound has been unveiled by such experiments as BOOMERANG and MAXIMA and, more recently, by the WMAP satellite. This led to a giant leap in our understanding of the Universe, but the investigation is not ended yet.

The book focuses on how the exploration of the cosmic background radiation has shaped our picture of the Universe, leading even the non-specialized readers towards the frontier of cosmological research, helping them to understand, using a simple language and captivating metaphors, the mechanisms behind the Universe in which we live.