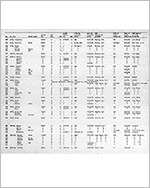 The December 7, 1941, attack on Pearl Harbor launched a rash of fear about national security, especially on the West Coast. In February 1942, just two months after Pearl Harbor, President Roosevelt issued Executive Order 9066, relocating all persons of Japanese ancestry, both citizens and aliens, outside of the Pacific military zone. The objectives of the order were to prevent espionage and to protect persons of Japanese descent from harm at the hands of Americans who were at the time demonstrating strong anti-Japanese attitudes.

The rosters that form Final Accountability Rosters Of Japanese-American Relocation Centers, 1944-1946 provide demographic information on the "evacuees" resident at the various relocation camps. They consist of alphabetical lists of evacuees resident at the relocation centers during the period of their existence. The lists typically provide the following information about the individual evacuees: name, family number, sex, date of birth, marital status, citizenship status, alien registration number, method of original entry into center (from an assembly center, other institution, Hawaii, another relocation center, birth, or other), date of entry, pre-evacuation address, center address, type of final departure (indefinite leave, internment, repatriation, segregation, relocation, or death), date of departure, and final destination. Included for each center are summary tabulations on evacuees resident at the center and on total admissions and departures.