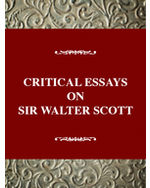 Essays address the Waverly novels of Sir Walter Scott (1771-1832), which were, in their time, among the most popular and widely read novels in Europe.