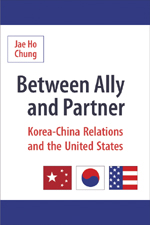 Between Ally and Partner: Korea-China Relations and the United States, 1st Edition

China and South Korea have come a long way since they were adversaries. The arc of their relationship since the late 1970s is an excellent model of East-West cooperation and, at the same time, highlights the growing impact of China's "rise" over its regional neighbors, including America's close allies.

South Korea-China relations have rarely been studied as an independent theme. The accumulation of more than fifteen years of research, Between Ally and Partner reconstructs a comprehensive portrait of Sino-Korean rapprochement and examines the strategic dilemma that the rise of China has posed for South Korea and its alliance with the United States. Jae Ho Chung makes use of declassified government archives, internal reports, and opinion surveys and conducts personal interviews with Korean, Chinese, and American officials.

The implications of Sino-Korean relations go far beyond the Korean Peninsula. South Korea was caught largely unprepared, both strategically and psychologically, by China's rise, and the dilemma that South Korea now faces has crucial ramifications for many countries in Asia, where attempts to counterbalance China have been rare. Thoroughly investigated and clearly presented, this book answers critical questions concerning what kept these two countries talking and how enmity was transformed into a zeal for partnership.

Jae Ho Chung is professor and chair of international relations at Seoul National University. He is the author or editor of ten books, including Charting China's Future, Central Control and Local Discretion in China, and Provincial Strategies of Economic Reform in Post-Mao China.

Front Cover.
Half Title Page.
Title Page.
Copyright Page.
Other Frontmatter.
Contents.
List of Tables.
Preface.
Other Frontmatter.
The Rise of Korea-China Relations and the United States.
1: The "Rise" of China and Its Impact on Neighbors.
2: From Confrontation to Cooperation: The Case of South Korea-China Relations.
3: The Evolution of Sino-South Korean Cooperation: A Literature Review.
4: The Focus of the Book.
5: The Structure of the Volume.
A Sketch of Sino-Korean Relations.
6: A "Special" Relationship in Geopolitical Time.
7: South Korea and China: A Contemporary Puzzle.
Perspectives on the Origins of the South Korea-China Rapprochement.
8: Strategic Accommodation by Minimizing Systemic Constraints.
9: Envisioning an Interdependent Trading State.
10: Reform and Opening: Linking the Changes from Within.
South Korea-China Relations Before 1988.
11: Sino-South Korean Relations Before 1979.
12: The Initiation Phase, 1979–1983.
13: The Expansion Phase, 1984–1987.
14: Patterns of Sino-South Korean Trade, 1979–1987.
15: South Korea's Investment in China, 1984–1987.
16: The Political Limits of Sino-South Korean Relations.
The Political Economy of Rapprochement, 1988–1992.
17: The Takeoff Phase, 1988–1990.
18: The Normalization Phase, 1991–1992.
19: Sino-South Korean Trade, 1988–1992.
20: South Korean Investment in China, 1988–1992.
21: The Infrastructure of South Korea-China Bilateralism.
22: The External Constraints on Sino-South Korean Bilateralism.
The Politics of Normalization: Actors, Processes, and Issues.
23: Top Leaders and Informal Channels.
24: Factors of Bureaucratic Politics.
25: Operation East Sea: Facts and Lessons.
Beyond Normalization: South Korea and China in the Post-Cold War Era.
26: Post-Cold War Northeast Asia in Flux.
27: Postnormalization Sino-South Korean Relations: Compatibility, Competition, and Cooperation.
28: Beyond Economics: Strategic Compatibility?.
29: The South Korean Variable: Divided Allegiance?.
The Rise of China and the U.S.-South Korean Alliance Under Strain.
30: China's Rise Over South Korea.
31: South Korea's Views of China and the United States.
32: Perceptual Ambivalence Toward China.
33: The U.S.-South Korea Alliance Under Strain: Room for Wedging?.
Between Dragon and Eagle: Korea at the Crossroads.
34: The Future of China: Beyond Simple Dichotomy.
35: The Menu of Choices and Rational Constraints.
36: Parameters of South Korea's Choice: Where the United States and China Converge.
37: Walking the Tightrope: The Choice of Not Making Choices.
Notes.
Index.