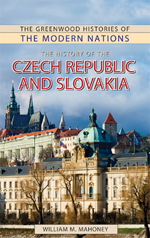 The History of the Czech Republic and Slovakia charts historical developments in the two nations to the opening decade of the 21st century. The book begins with an overview of the geography, climate, people, economy, and government of both the Czech and Slovak republics. Subsequent chapters offer a chronologically organized survey of historical events, trends, ideas, and people. Starting with the early Slavic settlements around the 5th century AD, the book explores Czech and Slovak history through the Middle Ages, the Renaissance and Early Modern eras, the Enlightenment, and the age of nationalism and revolution. Chapters on the 20th century include discussion of the World Wars, the interwar Czechoslovak state, the Communist decades, the Prague Spring, and the Velvet Revolution of 1989. The story is brought up to date with insights into developments in the independent Czech and Slovak republics since 1993.

Front Cover.
Half Title Page.
Advisory Board.
Title Page.
Copyright Page.
Contents.
Series Foreword.
Acknowledgments.
Timeline of Historical Events.
Map.
1: The Czech Republic and Slovakia Today.
2: Origins and Medieval Legacies.
3: The Late Middle Ages.
4: Religious Controversies and Military Conflicts (1400s-1700s).
5: Into the Modern Era: Reform, Revolution, and National Awakening (1740–1914).
6: World War I and the First Czechoslovak Republic (1914–1938).
7: The Munich Agreement and World War II (1938–1945).
8: The Postwar Era and the Communist Regime (1945–1989).
9: The Velvet Revolution, the “Velvet Divorce,” and the Two Republics (1989–2009).
10: Notable People in the History of the Czech Republic and Slovakia.
Bibliography.
Index.
About the Author.
Other Titles in the Greenwood Histories of the Modern Nations.