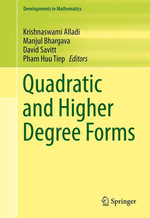 In the last decade, the areas of quadratic and higher degree forms have witnessed dramatic advances. This volume is an outgrowth of three seminal conferences on these topics held in 2009, two at the University of Florida and one at the Arizona Winter School. The volume also includes papers from the two focused weeks on quadratic forms and integral lattices at the University of Florida in 2010.Topics discussed include the links between quadratic forms and automorphic forms, representation of integers and forms by quadratic forms, connections between quadratic forms and lattices, and algorithms for quaternion algebras and quadratic forms. The book will be of interest to graduate students and mathematicians wishing to study quadratic and higher degree forms, as well as to established researchers in these areas. Quadratic and Higher Degree Forms contains research and semi-expository papers that stem from the presentations at conferences at the University of Florida as well as survey lectures on quadratic forms based on the instructional workshop for graduate students held at the Arizona Winter School. The survey papers in the volume provide an excellent introduction to various aspects of the theory of quadratic forms starting from the basic concepts and provide a glimpse of some of the exciting questions currently being investigated. The research and expository papers present the latest advances on quadratic and higher degree forms and their connections with various branches of mathematics.