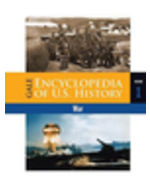 Gale Encyclopedia of U.S. History: War provides a broad overview of war throughout American history, with a special emphasis on how war effects---and is affected by---political, economic, and social change in American and global society.

In two volumes, the set is organized chronologically, by war, into chapters. Chapters include:

Each chapter features an introductory essay on the war followed by entries grouped under consistent subheads:

Gale Encyclopedia of U.S. History: War consists of approximately 400 entries, including subject entries and biographies that average about 1,000 words; 300 images, including maps; a chronology; a glossary; sources for further study; and a general index.

"This two-volume work for students and generalist readers presents a broadly chronological examination of US military history." --Reference & Research Book News, May 2008

"This is another in the Encyclopedia of U.S. History series that high school librarians may consider acquiring in the eBook version, as it provides an outstanding supplement to U.S. history texts. Highly recommended for public and high school libraries." --Doug's Student Reference Room, July 2008 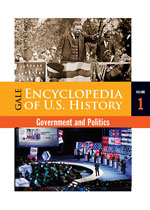