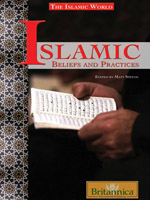 Islam is the second most followed religion on Earth, with more than one billion practicing Muslims around the globe. However, few Westerners fully understand the beliefs of the religion nor the cultural practices that accompany it. This book explores Islam from the prophet Mohammad to the Five Pillars of Islam, which includes the most important rituals of the faith, including fasting at Ramadan, and hajj, the pilgrimage to the holy city of Mecca.