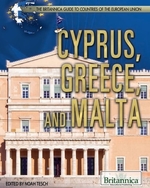 For centuries islands of the Mediterranean served as a cultural crossroads, with the Phoenicians, Romans, and Arabs variously settling and colonizing the area. Cyprus, Greece, and Malta in particular were subject to the influence of foreign powers, and remained so for much of their histories. Today, each has gained its independence and gone on to become an active member of the European Union. This lively volume examines the historical events that shaped these EU countries, as well as the cultural traditions of the diverse societies that call them home.