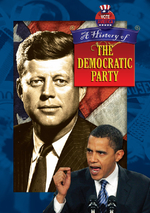 A History of the Democratic Party, 1st Edition

Reaching all the way back to Thomas Jefferson, the Democratic Party has been in existence almost as long as there has been a United States of America. It was born as a "party of the people," according to Jefferson, a political party designed to appeal to the average American citizen. Throughout the years the party has risen and fallen with the political fortunes of the United States. Yet, as the twenty–first century enters its second decade, the party remains a viable political force. The party has changed greatly since Jefferson's day—just like the country it serves. The story of the Democratic Party is the story of America.