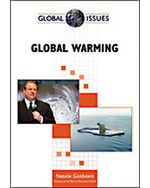 It is an undisputed fact that the Earth's climate is changing, and although the scientific community continues to debate the exact correlation between human activity and climatic change, there is now almost universal consensus that humankind directly impacts Earth's climate, an idea referred to as global warming. Scientists are continuously gathering data that hints at a bleak future. Despite ever-increasing technological advances, recent events such as Hurricane Katrina in the United States and Cyclone Nargis in Myanmar reveal how vulnerable humanity is to the weather. This is the reason many scientists advocate that countries take an active role in limiting the damages they cause, expanding the global warming movement from an environmental issue to a political and social one. Global Warming offers a clear, objective account of the science behind climate change, the potential harm that industrial economies cause to the environment, the international debates that have emerged, and the potential for mitigation. This new volume explores specific case studies, including the United States, Brazil, Australia, Germany, and China, analyzing the effects each country has had on the climate and the steps they are taking to ensure a sustainable future.