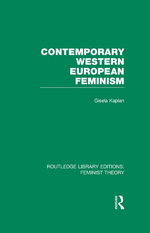 Contemporary Western European Feminism is a ground-breaking history of feminism. Gisela Kaplan invites a critical analysis of current ideas, terms and assumptions about our modern world. Written confidently and with compassion, this is the story of a long revolution that has set out to change predominant attitudes and transform value hierarchies and human lifestyles. By outlining the postwar histories of individual countries Kaplan contextualises women's movements and documents a significant chapter of European social history. She poses questions about the interrelationship between the new movements and the parliamentary democracies in which they occurred, while analysing the contradictions of living in modern capitalist countries. Contemporary Western European Feminism also tackles important contradictions, such as those between the welfare state and the free market economy; industrialisation and religious value systems; social engineering and the production of wealth; and dissent and patrimonial systems of democracy. For those wanting to know more about Europe without the intimidating barriers of language and for those already experts in its social history, Contemporary Western European Feminism is essential reading.