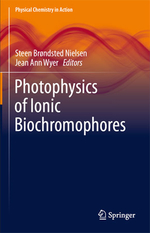 The book 'Photophysics of Ionic Biochromophores' summarizes important recent advances in the spectroscopy of isolated biomolecular ions in vacuo, which has within the last decade become a highly active research field. Advanced instrumental apparatus and the steady increase in more and more powerful computers have made this development possible, both for experimentalists and theoreticians. Applied techniques described here include absorption and fluorescence spectroscopy, which are excellent indicators of environmental effects and can thus shed light on the intrinsic electronic structures of ions without perturbations from e.g. water molecules, counter ions, nearby charges, and polar amino acid residues. When compared with spectra of the chromophores in their natural environment, such spectra allow to identify possible perturbations. At the same time gas-phase spectra provide important benchmarks for quantum chemistry calculations of electronically excited states. This volume focuses on biological systems from protein biochromophores, e.g. the protonated Schiff-base retinal responsible for vision, and individual aromatic amino acids to peptides and whole proteins, studied using visible, ultraviolet and vacuum ultraviolet light. Work on DNA nucleotides and strands that are amenable to mass spectrometric studies because of the negatively charged sugarphosphate backbone are also presented. DNA strands represent an example of the interplay between multiple chromophores, which is even harder to model correctly than just single chromophores due to spatially extended excited states and weak coupling terms. The experimental techniques used to measure spectra and commonly used theoretical methods are described with a discussion on limitations and advantages. The volume includes an updated status of the field and interesting future directions such as cold ion spectroscopy.