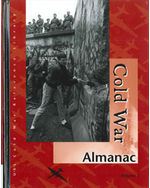 Stretching from the end of World War II to 1989, the Cold War between the Western powers and the Communist bloc shaped national alliances around the world.

In 15 chapters, the Almanac treats the historic causes of the tension; the mutual suspicions that fueled the conflict for more than 40 years; the ideological clash between communism and democracy; and the policies that marked the long standoff -- the Marshall Plan,Truman's Point Four program, the nuclear arms race, economic aid, the Berlin Wall, détente; and much more. Also covered are the times when the Cold War burst into armed conflict in such areas as Korea, Cuba and Southeast Asia.

Giving first-hand views of various aspects of the Cold War, Primary Sources provides key complete and excerpted documents of the war, such as Winston Churchill's "Iron Curtain" speech and correspondence between John F. Kennedy and Nikita Khrushchev during the Cuban Missile Crisis.