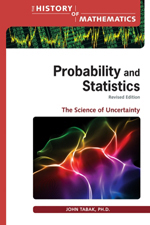 PROBABILITY AND STATISTICS, Revised Edition deals with the history of probability, describing the modern concept of randomness and examining "pre-probabilistic" ideas of what most people today would characterize as randomness. This revised book documents some historically important early uses of probability to illustrate some very important probabilistic questions. It goes on to explore statistics and the generations of mathematicians and non-mathematicians who began to address problems in statistical analysis, including the statistical structure of data sets as well as the theory of sampling and the characterization of the nature of variation. The final chapter describes the role of statistics in the development, testing, licensure, and subsequent study of vaccines. A new chapter has been added that gives special attention to vaccines for measles, polio, pertussis, and rubella.

Front Cover.
Half Title Page.
Title Page.
Copyright Page.
Dedication.
Contents.
Preface.
Acknowledgments.
Introduction.
1: Probability.
2: The Idea of Randomness.
3: The Nature of Chance.
4: Surprising Insights Into Probability and Its Uses.
5: Randomness in a Deterministic Universe.
6: Random Processes.
7: Probability as a Mathematical Discipline.
8: Probability and Risk, an Application.
9: Statistics.
10: Introduction.
11: The Beginnings of Statistics.
12: Data Analysis and the Problem of Precision.
13: The Birth of Modern Statistics.
14: The Theory of Sampling.
15: Statistics and Vaccinations.
Afterword.
Chronology.
Glossary.
Further Resources.
Index.