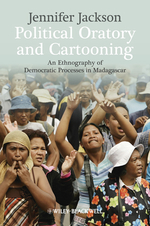 Political Oratory and Cartooning: An Ethnography of Democratic Process in Madagascar, 1st Edition

Called kabary in the island nation of Madagascar, political oratory jostles with political cartoon satire in competing for public attention and shaping opinion. The apparent simplicity of these modes of political commentary conceals nuanced subtleties, which inform the constantly evolving landscape of politics. Linguistic anthropologist Jennifer Jackson offers an original semiotic analysis of the formative social role played by these narratives in Madagascars polity. Though political orators and cartoonists rarely come face to face, their linguistic skirmishing both reflects and informs the political process, deploying rhetorical devices that have significant impacts on the vernacular political culture, its language and publics. This new ethnography examines the dynamic interplay between past and new forms of oratory and satire and their effects in social, religious, class, and transnational contexts. Jackson assesses how far they mirror the vicissitudes of political agency and authority, especially under the leadership of President Marc Ravalomanana. The author shows how democracy must be understood as historically contingent, bound in a local and global accretion of social and economic relations, and always mediated by language.

Front Cover.
Half Title Page.
Other Frontmatter.
Title Page.
Copyright Page.
Other Frontmatter.
Contents.
List of Figures.
Note on Orthography.
Acknowledgments.
Preface.
1: Introduction: “Look Out! The Sleeping Locusts Awake”.
2: A History of Language and Politics in Madagascar.
3: The Structural and Social Organization of Kabary Politika.
4: The Structural and Social Organization of Kisarisary Politika (Political Cartooning).
5: Building Publics through Interanimating and Shifting Registers.
6: “Stop Acting like a Slave”: The Ideological and Aesthetic Dimensions of Syntax and Register in Political Kabary and Political Cartooning.
7: “That's What You Think”: Arguing Representations of Truth in Language.
8: Conclusion: The Constraints and Possibilities of Democracy.
Index.