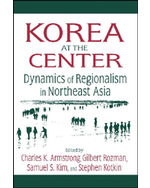 Korea at the Center, 1st Edition

Illuminating the role of the Korean peninsula in three modern historical periods, the eminent international contributors to this publication offer a fresh appraisal of Korea as the key to the coalescence of a broad, open Northeast Asian regionalism in the 21st century.