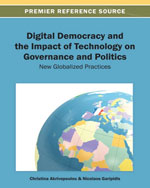 Digital Democracy and the Impact of Technology on Governance and Politics: New Globalized Practices, 1st Edition

The evolution of modern technology has allowed digital democracy and e-governance to transform traditional ideas on political dialogue and accountability.Digital Democracy and the Impact of Technology on Governance and Politics: New Globalized Practices brings together a detailed examination of the new ideas on electronic citizenship, electronic democracy, e-governance, and digital legitimacy. By combining theory with the study of law and of matters of public policy, this book is essential for both academic and legal scholars, researchers, and practitioners.

Front Cover.
Title Page.
Copyright Page.
Editorial Advisory Board.
Table of Contents.
Detailed Table of Contents.
Preface.
1: Digital Democracy, Transparency, and the Role of ICT.
2: Transparency in the Open Government Era: Friends or Foes?.
3: New Technologies and Democratic Participation on the International Level.
4: Interpreting “You” and “Me”: Personal Voices, PII, Biometrics, and Imperfect/Perfect Electronic Memory in a Democracy.
5: The Cyberspace as the Locus for Political Dialogue and Participation: Towards a New Public Sphere?.
6: Influential Greek Political Blogs: What Are They Talking About?.
7: Action Potentials: Extrapolating an Ideology from the Anonymous Hacker Socio-Political Movement (A Qualitative Meta-Analysis).
8: Facebook as a Tool for Enhancing Alternative/Counter-Public Spheres in Cyprus.
9: The Civil Internet Diplomacy and China's Countermeasures.
10: The Politics of ICT and Their Influence on Democracy: Informational Security and Surveillance in Public Spaces.
11: The Monitoring of Employees' Conduct through the Use of a Global Positioning System (GPS).
12: The Role of Information Security and Cryptography in Digital Democracy: (Human) Rights and Freedom.
13: A Paradigm Shift in Swedish Electronic Surveillance Law.
14: The Right to Anonymity in Political Activities: A Comparative Look at the Notion of Political Surveillance.
15: Democracy via Inclusion: Collective Governance and the Social Aspects of Affirmative Action and Non-Discrimination.
16: Right to Governance and Right to Collective Bargaining: In the Background of the Specified Right to Strike as Fundamental Right and Positive Obligation of the Slovak Republic.
17: Affirmative Action in the United States and Positive Action in the European Union in the Context of Comparative Law.
18: The Prohibition of Discrimination on Grounds of Age in EU Law: Some Remarks on the Conceptual Evolution of the Principle in Light of the Judgments of Wolf, Petersen, and Kücükdeveci.
19: Closing Notes: The Identity of the Subject in the Era of Governance, Globalization, and the ICT.
20: Corporate Linguistic Rights through the Prism of Company Linguistic Identity Capital.
21: Modeling the Relationship between a Human and a Malicious Artificial Intelligence, Natural-Language 'Bot in an Immersive Virtual World: A Scenario.
22: Citizen and Citizenship in the Era of Globalization: Theories and Aspects of the Classic and Modern Citoyen.
Compilation of References.
About the Contributors.
Index.