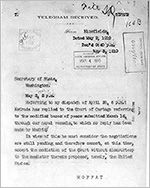 The United States occupation of Nicaragua was part of the larger conflict known as the Banana Wars. The formal occupation began in 1912, although several other operations were conducted before the full scale invasion. United States military interventions in Nicaragua were intended to prevent the construction of the Nicaraguan Canal by any nation but the United States. Nicaragua assumed a quasi-protectorate status under the 1916 Chamorro-Bryan Treaty. The occupation ended as Augusto César Sandino, a Nicaraguan revolutionary, led guerrilla armies against U.S. troops. The onset of the Great Depression made it costly for the U.S. government to maintain the occupation so a withdrawal was ordered in 1933. Comprising records of the State Department's Central Classified Files, this collection contains records relating to the internal affairs of India, during the period 1945-1949. The records include instructions sent to and correspondence received by the State Department; the State Department's internal documentation, as well as correspondence between the Department and other federal departments and agencies, Congress, and private individuals and organizations; telegrams, airgrams, instructions, inquiries, studies, memoranda, situation reports, translations, special reports, plans, and official and unofficial correspondence.