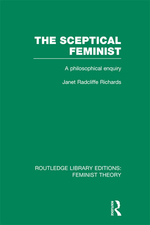 A systematic and original study of feminist issues, The Sceptical Feminist fights a battle on two fronts: against the view that little or nothing is wrong with women's position, and at the same time against much current feminist dogma. It is written by a philosopher who, in the tradition of John Stuart Mill's classic The Subjection of Women , avoids the psychological and sociological speculation characteristic of much recent feminism and concentrates on the analysis of arguments. By these means she constructs a powerful and often unexpected case for radical change in the position of women, as well as for a change of attitude among many feminists. From her analysis, Janet Radcliffe Richards argues that positive discrimination in favour of women is essential for justice, that traditional sexual roles never had anything to do with beliefs about each sex's capabilities, that current abortion practice reflects a disguised wish to punish women's sexual activity, that 'women's work' is rightly little valued, and that traditional ideals of femininity are inherently pernicious. But she also argues that a movement for sexual justice cannot 'take the woman's side in everything', that feminism should not be thought of as the primary struggle, that dismissing 'male' logic and science will undermine feminists' own intentions, that the state should not subsidise motherhood, that ever available crèches would be disastrous for women, that there is no inherent degradation in prostitution, and that contempt for beauty and adornment has nothing to do with feminism. This is a book for feminists, for their critics, and for students of moral, political and social philosophy.

Front Cover.
Half Title Page.
Title Page.
Copyright Page.
Contents.
Acknowledgments.
Other Frontmatter.
Introduction.
1: The Fruits of Unreason.
2: The Proper Place of Nature.
3: Enquiries for Liberators.
4: Sexual Justice.
5: The Feminist and the Feminine.
6: Woman's Work.
7: The Unadorned Feminist.
8: Society and the Fertile Woman.
9: Society and the Mother.
10: The Unpersuaded.
Notes.
Bibliography.
Index.