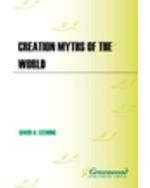 Creation Myths of the World: An Encyclopedia, 1st Edition

ABC-CLIO's breakthrough reference work on creation beliefs from around the world returns in a richly updated and expanded new edition. From the Garden of Eden to the female creators of Acoma Indians to the rival creators of the Basonge tribe in the Congo, Creation Myths of the World: An Encyclopedia, Second Edition examines how different cultures explain the origins of their existence.

Expanded into two volumes, the new edition of Creation Myths of the World begins with introductory essays on the five basic types of creation stories, analyzing their nature and significance. Following are over 200 creation myths, each introduced with a brief discussion of its culture of origin. At the core of the new edition is its enhanced focus on creation mythology as a global human phenomenon, with greatly expanded coverage of recurring motifs, comparative themes, the influence of geography, the social impact of myths, and more.