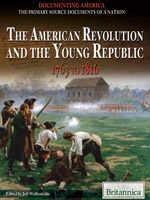 Documenting America: The Primary Source Documents of a Nation: The American Revolution and the Young Republic, 1st Edition

Struggling against unjust taxation and British intervention in colonial affairs, the colonies that would come to be part of the United States of America were ripe for revolution in the late eighteenth century. Led by impassioned individuals, Americans waged a series of protests against the British that eventually led to the Revolutionary War and effectively culminated with the War of 1812. In this compelling volume, readers are introduced to the architects of American independence and their most ardent arguments against British rule, the events of the American Revolution, and the documents that helped shape a country.