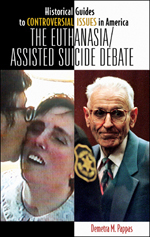 This revealing volume explores recent historical perspectives on the modern euthanasia and assisted-suicide debate and the political arenas in which it has unfolded.

Front Cover.
Half Title Page.
Other Frontmatter.
Title Page.
Copyright Page.
Other Frontmatter.
Dedication.
Contents.
Acknowledgments.
Introduction.
1: Medical Euthanasia and Assisted Suicide: A Twentieth-Century Issue.
2: The 1930s and 1940s: From the King of England to the Holocaust.
3: The 1950s: The First Anglo-American Prosecutions for Medical Euthanasia and the Resulting Academic Debate.
4: The 1960s–1980s: Decriminalizing Suicide and Non-Voluntary Euthanasia of Those in Persistent Vegetative States.
5: The 1990s and Jack “Dr. Death” Kevorkian: From Physician-Assisted Suicide to Medical Euthanasia.
6: The 1990s: The Non-Michigan Parallel Text of Doctor Prosecution and Initial Failed Legislative Efforts.
7: Legalizing and Implementing Physician-Assisted Suicide in Oregon in the 1990s and 2000s.
8: The 2000s: Post-Millennium Case Studies of State Reactions to Euthanasia and Assisted Suicide.
Concluding Commentary.
Appendix: Table of Cases, Legislation, Proposed Legislation, and Initiatives.
Glossary.
Bibliography.
Index.
About the Author.