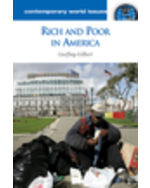 Rich and Poor in America: A Reference Handbook, 1st Edition

In the United States today, the net worth of the Forbes 400 richest Americans increased by $120 billion in the last year, yet nearly 20 percent of households have zero or negative net worth. This is just one indication of a three-decade-long increase in the gap between rich and poor that is on the minds of the public, politicians, the media, economists, and activists.

Rich and Poor in America: A Reference Handbook provides an in-depth analysis of -- and possible solutions for -- the growing disparity between those at the top of the economic ladder and everyone else, a disparity that has reached its highest level since the 1920s.

Expertly researched and written, Rich and Poor in America explores a wide range of explanations for the trend that undercuts the U.S.'s "Land of Opportunity" image, including heavy immigration, weakening labor unions, globalization, and technological change. Separate chapters look at the issue chronologically and from a global perspective, while biographical sketches provide fascinating portraits of some of the "winners" in our winner-take-all society, as well as leading scholars and activists working on this issue.