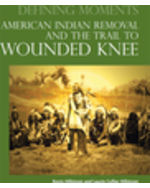 American Indian Removal and the Trail to Wounded Knee is divided into three primary sections. The first of these sections, the Narrative Overview, provides a detailed, factual account of the development of Indian removal policies and the tragedy at Wounded Knee, all within the wider context of Indian-white relations in America. Special areas of coverage include European colonization, westward expansion of the United States and related government efforts to relocate American Indian nations to federal reservations, and the Indian Wars for control of the Great Plains.

The second section, Biographies, provides valuable biographical background on leading figures involved in Indian removal and the incident at Wounded Knee, including Andrew Jackson; John Ross; Red Cloud; George Armstrong Custer; Wovoka; and Sitting Bull. Each biography concludes with a list of sources for further information on the profiled individual.

The third section, Primary Sources, collects essential and illuminating documents related to Wounded Knee and Indian removal. This diverse collection includes an 1830 speech in which Andrew Jackson attempts to justify Indian removal; eyewitness accounts of the Battle of Little Bighorn and the Wounded Knee Massacre; white and Indian descriptions of the impact of western expansion on the health and vitality of Indian nations; the memoir of a Native American child wrenched from her family to attend a white boarding school; and a manifesto of the radical American Indian Movement.

Front Cover.
Half Title.
Title Page.
Copyright Page.
Table of Contents.
Preface.
How to Use This Book.
Research Topics for American Indian Removal and The Trail to Wounded Knee.
1: Narrative Overview.
2: Prologue.
3: European Colonization of the “New World”.
4: A Vanishing Way of Life.
5: Standing in the Way of Westward Expansion.
6: Sitting Bull and the Sioux Wars.
7: The Massacre at Wounded Knee.
8: American Indians in a White World.
9: The Legacy of Wounded Knee.
Biographies.
Primary Sources.
Important People, Places, and Terms.
Chronology.
Sources for further study.
Bibliography.
Photo and Illustration Credits.
Index.