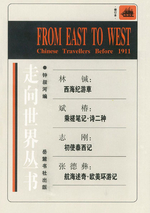 From East to West: Chinese Travellers Before 1911, 1st Edition

A collection of diaries, notes, and travelogues of Chinese nationals who travelled to Europe, the United States, and Japan between 1840 and 1911 after China was defeated in the First Opium War. Includes the following: Travels of United States (1847–1840) by Lin Zhen; First Mission to Western Countries by Zhi Gang; European Stories and Travel to Europe and America by Zhang Deyi; My Life in China and America by Rong Hong; Diaries on America trip by Qi Zhaoxi, depicting Qi's escort of young teenagers to the U.S. for overseas studies in 1874; Accompany To French by Zhang Deyi; and Study Guide to Scotland by Lin Yaoru; Diaries on Japan by Luo Sen; Five Travel Books on Japan before 1894; Travel to Japan by Wang Tao; and Poems on Japan by Huang Zunxian; Diaries on London and Paris by Guo Songtao; diaries kept by Zeng Jize; Roaming Europe by Wang Tao, an account of his experience in Europe in 1867; New Record of Traveling Around the Earth by Li Shuchang; Western Stories by Li Shuchang, an account of the British, French, German, and Spanish cultures from 1877 to 1881; and European Notes by Xu Jianyin, which describes the author's investigation of European arsenals and placing the order for armored ships for China; Diaries on England by Liu Xihong; Accompanying to England and Russia by Zhang Deyi; diaries kept by Xue Fucheng; Li Hongzhang's Official Visits to Europe and America by Cai Erkang and Young John Allen, which records Li Hongzhang's attending the coronation ceremony of Nicholas II in 1896, the signing of the "Sino-Russian Secret Agreement", and his visits to various countries in the West; Diaries on Nine Countries by Dai Hongci and Diaries on Political Survey by Zai Ze; Travel Notes to Two Western Countries by Kang Youwei; Travel to America by Liang Qichao; 1903 Trip and Returning to China by Shan Shi Li.