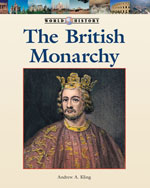 The ability to change lives and fortunes is a hallmark of the long history of the British monarchy. The lure of its power and prestige was the focus of generations of backroom and bedroom politics and international intrigue. Its history includes wars between nations, between fathers and sons, and between brothers, cousins, and rank outsiders. Over the centuries, the role of the kings and queens of the dominion has changed with the times - sometimes peacefully, sometimes violently - but the British monarchy's ability to adapt to an evolving society marks it as one of the most successful on earth. And while modern Great Britain now encompasses England, Scotland, Wales, and Northern Ireland, the current monarchy has its origins in the ancient rulers of England. This title in Lucent's World History series offers an overview of the rise and rule of the British Monarchy, detailing the lives of the royal family throughout history, how they came to power, how they lost or relinquished power, and their role in modern society.