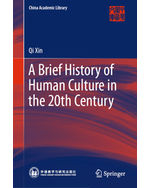 
A Brief History of Human Culture in the 20th Century, 1st Edition

This book examines the cultural concepts that guided the development of the age of mankind — the changes that took place in historical, philosophical, scientific, religious, literary, and artistic thought in the 20th century. It discusses a broad range of major topics, including the spread of commercial capitalism; socialist revolutions; the two world wars; anti-colonialist national liberation movements; scientific progress; the clashes and fusion of Eastern and Western cultures; globalization; women's rights movements; mass media and entertainment; the age of information and the digital society. The combination of cultural phenomena and theoretical descriptions ensures a unity of culture, history and logic. Lastly, the book explores the enormous changes in lifestyles and the virtualized future, revealing cultural characteristics and discussing 21st -century trends in the context of information technology, globalization and the digital era. Covers a broad range of subjects in 20th-century culture, such as revolutions and political movements. It focuses on conflicts between Western and Eastern cultures, industrialization and modernization, and the ethics and values of culture and arts; discusses virtual reality, a latecomer with enormous potential to change the life and culture of mankind; and proposes a fair and impartial social order, based on humanized science and standardized finance.

Front Cover.
Half Title Page.
Other Frontmatter.
Title Page.
Copyright Page.
Foreword.
Preface to the English Version.
Introduction.
Contents.
1: Thinkers Standing on the Threshold of the Century.
2: Human Joys and Sorrows in the Process of Industrialization.
3: The Sensual Culture in Commercialized Civilization.
4: Rallying Call of the Twentieth Century—War, Revolution and the Downfall of Fascism.
5: The Impact of Science and Technology on Culture.
6: Clashes Between Eastern Culture and Western Culture.
7: Social Mobility, Women's Liberation and Globalization.
8: From “Modernism” to “Post-Modernism”—Fission of Literature, Arts and Society.
9: Harbinger of the Digital Era.
10: Today's Afterglow and Tomorrow's Aurora.
11: Prophetic Contemplation on the Eve of a New Century.
Bibliography.