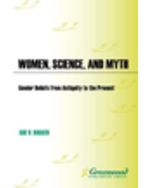 Women, Science, and Myth: Gender Beliefs from Antiquity to the Present, 1st Edition

Over the course of history, scientific research has been used to support a number of dubious assumptions, nowhere more so than in the area of gender -- several 19th century studies as well as many 20th century studies of brain differences, claim to prove that men's brains are superior to women's. Yet the scientific community has not often welcomed the work of women scientists. Is there a connection?

Women, Science, and Myth: Gender Beliefs from Antiquity to the Present examines the ways scientists have researched gender throughout history, the ways those results have affected society, and the impact they have had on the scientific community and on women, women scientists, and women's rights movements.

In chronologically organized entries, Women, Science, and Myth explores the people and experiments that exemplify the problematic relationship between science and gender throughout the centuries, with particular emphasis on the 20th century. The encyclopedia offers a section on focused cross-period themes such as myths of gender in different scientific disciplines and the influence of cultural norms on specific eras of gender research. It is a timely and revealing resource that celebrates science's legitimate accomplishments in understanding gender while unmasking the sources of a number of debilitating biases concerning women's intelligence and physical attributes.