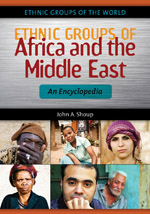 ETHNIC GROUPS OF AFRICA AND THE MIDDLE EAST contains encyclopedic entries arranged alphabetically within ethno-linguistic classifications. Each entry has four main sections: an introduction identifying the language group, where they are found, and their numbers; a brief discussion of their origins and early history; a section on cultural life that includes religion, literature, social organization, and art; and a final section on political organization and recent history. The contents are appropriate for high school and undergraduate students as well as for experts who need a refresher on groups in Africa and the Middle East. While certain ethnic groups have been combined into a single entry, some—such as the Tuareg, who are a Berber people—are described within their own entries because of their importance in history or cultural domination.