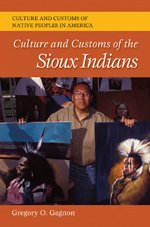 Culture and Customs Of the Sioux Indians, 1st Edition

The Sioux are a Native American people who live in reservations and communities within Minnesota, Montana, Nebraska, North and South Dakota, and Wisconsin, as well as certain provinces in Canada. According to U.S. Census Report data, over 150,000 individuals identify themselves as Sioux more than any other tribe besides Cherokee, Navajo, Latin American Indian, and Chocktaw. CULTURE AND CUSTOMS OF THE SIOUX INDIANS reveals the details of the Sioux' past, such as wars and conflicts, historical tools, technology, and traditional housing. It also provides a comprehensive examination of the Sioux in the modern world, covering topics such religion, education, social customs, gender roles, rites of passage, lifestyle, cuisine, arts, music, and much more. Readers will discover how the Sioux today merge traditional customs that have survived their tumultuous history with contemporary culture.