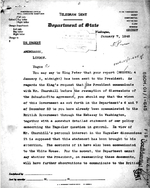 Lacking a tradition of political compromise that might forge a national consensus, Yugoslavia remained divided as World War II ended. More than three years of Nazi occupation yielded bloody fighting among three Yugoslav factions as well as with the invaders. Two results of that war had particular impact on the postwar condition of Yugoslavia. The first was a vivid new set of memories to kindle hostility between Serbs and Croats, the majority of whom had fought on opposite sides in the occupation years; the second was the emergence of the unifying war hero Tito, who became dictator of a nonaligned communist federation. After declaring independence from the Soviet alliance in 1948, Tito also modified Yugoslavia's Stalinist command economy by giving local worker groups limited control in a self-management system. Although ultimately dominated by the party, this system brought substantial economic growth and made Yugoslavia a model for the nonaligned world.