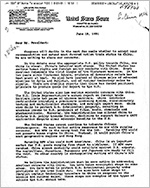 The historic student standoff of 1989 was sparked by the death of a pro-democracy and anti-corruption official, Hu Yaobang. More than 100,000 protesters converged to mourn Hu's death, but they lacked a unified cause or leadership. The so-named June 4th Movement lasted seven weeks, until tanks cleared Tiananmen Square leaving many protesters dead or severely injured.

Following the conflict, the government conducted widespread arrests of protesters and their supporters, cracked down on other protests around China, banned the foreign press from the country and strictly controlled coverage of the events in the PRC press.

Consisting of documents from White House Office of Records\ Management (WHORM) Subject File categories and the Staff and Office Files, this collection documents the response of the George H. W. Bush White House to deteriorating U.S.-Chinese relations and worldwide support for the movement and condemnation of the Chinese government response.