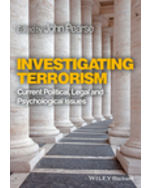 This work takes a look behind the closed doors of terrorist cases. Major players from the world of counter-terrorism, including politicians, lawyers, psychologists and police, offer analyses of recent terror attacks and share their knowledge of terrorist behaviour.

Front Cover.
Half Title Page.
Praise for Investigating Terrorism: Current Political, Legal and Psychological Issues.
Title Page.
Copyright Page.
Dedication.
Contents.
About the Editor.
About the Contributors.
Introduction.
Political, Legal and Policing Context.
1: The Impact and Consequences of Terrorist Legislation in the United Kingdom Since 2001: A Review.
2: Investigating Terrorism in the First Decade of the Twenty-First Century: A Different Sort of Crime.
The Criminal Justice Process.
3: Challenge, Compromise and Collaboration: Part of the Skill Set Necessary for Interviewing a Failed Suicide Bomber.
4: Urgent Interviews and the Concept of Oppression in Terrorist Cases.
5: Defence Counsel in Terrorism Trials.
6: An Garda Síochána Model of Investigative Interviewing of Witnesses and Suspects.
7: Risk Assessment of Terrorist Offenders: A Challenge Too Far?.
8: Hostage Negotiation and Communication Skills in a Terrorist Environment.
Individual and Group Perspectives.
9: Understanding Suicide Terrorism: Insights from Psychology, Lessons from History.
10: Taking Anders Breivik Seriously as a Political Terrorist.
11: Social Psychology and the Investigation of Terrorism.
12: Community Surveillance and Terrorism.
13: Thinking about Peace While Engaged in Counter-Terrorism: The Primacy of Intelligence.
Index.