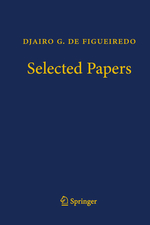 This volume presents a collection of selected papers by the prominent Brazilian mathematician Djairo G. de Figueiredo, who has made significant contributions in the area of Differential Equations and Analysis. His work has been highly influential as a challenge and inspiration to young mathematicians as well as in development of the general area of analysis in his home country of Brazil.In addition to a large body of research covering a variety of areas including geometry of Banach spaces, monotone operators, nonlinear elliptic problems and variational methods applied to differential equations, de Figueiredo is known for his many monographs and books. Among others, this book offers a sample of the work of Djairo, as he is commonly addressed, advancing the study of superlinear elliptic problems (both scalar and system cases), including questions on critical Sobolev exponents and maximum principles for non-cooperative elliptic systems in Hamiltonian form.