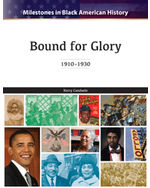 Bound for Glory: 1910-1930, part of the Milestones in Black American History series, focuses on the unprecedented mass movement of black Americans from the South to the North, and goes on to examine blacks' struggle for full citizenship during World War I, the race conflicts that followed, and the explosion of African-American culture that rocked the nation's urban centers in the 1920s.