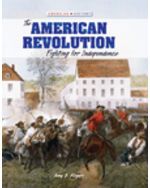 The United States was formed by a large group of people fighting back against perceived injustices. Americans wanted the ability to create and enforce their own laws, as they did not feel the British government was acting in Americas best interests. Both sides of the story are presented to readers, along with colorful maps and engaging primary sources. This fresh approach encourages them to think critically about the events that ultimately led to the war for American independence.