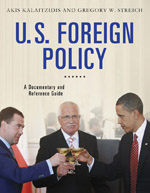 Throughout the latter half of the 20th century, the United States’s foreign policy earned it the reputation of being “the world’s policeman.” From Roosevelt to Reagan, World War II through to the War on Terror, America has been at the forefront of nearly every significant global issue or conflict. Recently, however, the protracted Iraq War and the deeply troubled state of the U.S. economy seem to have spawned a growing unease with U.S. global involvement and increasing sentiments of isolationism. How has America’s foreign policy evolved since its inception as a nation, and how are the events and lessons of the past likely to influence our future policies?