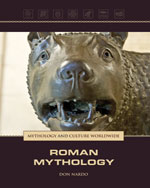 This new volume in Lucent's Mythology and Culture Worldwide series looks at Roman mythology, examines connections between Rome's myths and its culture, and explains how the beliefs, values, and experiences of that culture are represented in stories about its founding fathers and the champions who fought for the survival of Rome. The myths of Aeneas, Romulus and Remus, the Six Brave Brothers, Horatius, Coriolanus and Volumnia, Cloelia, and others are explored. Hero myths and the values they represented are explored. This volume has a map of the Roman Empire, a family tree of Rome's founders, a table of major characters with name pronunciations and brief descriptions, a glossary, sidebars, fact boxes, a bibliography of sources for further study, and a subject index.