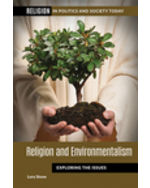 Beginning in the late 1960s, a growing number of activists, scholars, and scientists asserted that traditional religions had been major contributors to the environmental crisis. In response, theologians, religious organizations, and religiously motivated activists became increasingly involved in environmental issues. At the same time, emerging nature-based belief systems emphasized values and lifestyles based in environmentalism. Today, religiously motivated environmentalism has become a powerful force in shaping environmental policy and human action globally and has joined forces with secular environmentalism. This book explores the background and current state of religious environmentalism, and includes an overview of its history, context, and significance today; chronology of key events; alphabetical reference entries that provide objective information about people, places, events, movements, works, and other topics, plus cross-references, further reading and a bibliography.