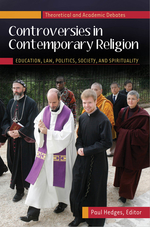 Controversies in Contemporary Religion: Education, Law, Politics, Society, and Spirituality is a three-volume set that addresses a wide variety of current religious issues, analyzing religion's role in the rise of fundamentalism, censorship, human rights, environmentalism and sustainability, sexuality, bioethics, and other questions of widespread interest. Providing in-depth context and analysis far beyond what's available in the news or online, this work will enable readers to understand the nature of and reasons for controversies in current headlines. The first volume covers theoretical and academic debates, the second looks at debates in the public square and ethical issues, while the third examines specific issues and case studies. These volumes bring detailed and careful debate of a range of controversies together in one place, including topics not often covered-for example, how religions promote or hinder social cohesion and peace, the relationship of religions to human rights, and the intersection of Buddhism and violence. Written by a range of experts that includes both established and emerging scholars, the text explains key debates in ways that are accessible and easy to understand for lay readers as well as undergraduate students researching particular issues or global religious trends.

Front Cover.
Half Title Page.
Editorial Board.
Title Page.
Copyright Page.
Dedication.
Contents.
Introduction.
1: What Is Religion? Or, What Is It We Are Talking About?.
2: Is the Study of Religion Religious? How to Study Religion, and Who Studies Religion.
3: Charisma, Scriptures, Revelation, and Reason: Sources of Religious Authority.
4: Religion and Embodiment: Religion and the (Latin American) Bodies That Practice It.
5: Religion, Commodification, and Consumerism.
6: Terror/ism and Violence in the Name of God.
7: Belonging, Behaving, Believing, Becoming: Religion and Identity.
8: Why Are There Many Gods? Religious Diversity and Its Challenges.
9: Is Religion Dying? Secularization and Other Religious Trends in the World Today.
10: Christian and Hindu, Jewish and Buddhist: Can You Have a Multiple Religious Identity?.
11: Empires and Religions: Colonialism, Postcolonialism, and Orientalism.
About the Editor and Contributors.
Volume 1 Index.
Title Page.
Contents.
1: Women in Religion: Does Gender Matter?.
2: Friend or Foe: Current Debates in Science and Religion.
3: Sexuality and Religion: Homosexuality and Religious Values.
4: Religion and Human Rights: Conflicts and Connections.
5: The New Atheists.
6: Censorship, Free Speech, and Religion.
7: Is Religion Environmentally Friendly? Connecting Religion and Ecology.
8: Religion and Culture: Religious Artifacts as T-shirts, Toys, and Museum Exhibits.
9: Are Religions Prejudiced? Religion and Disability.
10: Religion, Nationalism, and International Relations.
11: Religion and Politics.
12: Riots, Mass Casualties, and Religious Hatred: Countering Anticosmopolitan Terror through Intercultural and Interreligious Understanding.
About the Editor and Contributors.
Volume 2 Index.
Title Page.
Contents.
1: The Rise of Fundamentalisms.
2: Loving the “Enemy”: An Alternative Narrative on Jewish-Muslim Relations.
3: Buddhism, Nationalism, and Violence in Asia.
4: Religion and Bioethics: Human Genetics and Embryo Research.
5: What Do Americans Think of Muslims? The 9/11 Islamic Community Center.
6: New Religious Movements, “Cults,” and the State.
7: Sharia Law and Women in Islam.
8: Can Christianity Take New Forms? Christianity in New Cultural Contexts.
9: New Religious Movements in Global Context.
10: Scandals.
11: Can Christians Engage in Non-Christian Practices? Eastern Meditations and Contemplative Prayer.
About the Editor and Contributors.
Volume 3 Index.