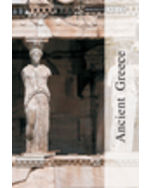 An A-Z survey of Greek history, culture, and civilization from its earliest archaeological remains until the Battle of Actium (31 B.C.E.), when Greek civilization merged with Roman to become Greco-Roman civilization.