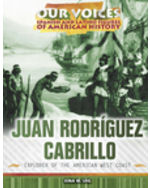 Though few may know his name, his achievement as the first European to discover San Diego Bay and many other areas on the California coast enshrines his name in the annals of American history. This exciting volume tells Cabrillo's story from an unknown soldier to the intrepid conquistador, crossbowman, landowner, shipbuilder, and explorer he became. As one of Hernan Cortes' soldiers during the conquest of Mexico and a founder of Guatemala, his actions loomed large in the future of both South America and North America. By both educating and entertaining, this biography illuminates a little-known but important Latino explorer.